Posted on November 02, 2015 Author: AutoCAD, AutoCAD MEP
By utilizing functionalities like layer keys and systems in AutoCAD MEP, the user will gain control over on what layer a given object will end up on. This tip is based upon electrical devices, and systems, but should be applicable to HVAC objects & systems as well as piping objects and systems.
Layers, layer keys and systems are taken from the “Aecb Model (US Imperial Ctb).dwt” template, but layer colors have been altered to display better on a white background and the layer standard edited to reflect the tip intentions.
All objects in AutoCAD ACA/MEP have a default layer key that controls which layer the object will end up on, but in AutoCAD MEP we can also work with systems. Basically the system layer key will override the object layer key, and place the given object on the systems layer.
Below a single switched socket outlet, and a single pole switch has been placed in the system “230 V Lighting” and “230 V Power,” resulting in the same objects ending up on different layers. 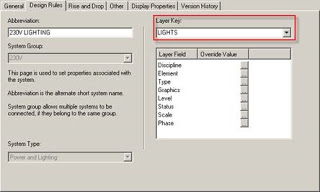 By picking a layer key from the list, the system will override the object layer, and place the inserted object on the system layer. By leaving the field blank, the system will ensure that the object is placed on the layer defined by the object’s layer key.
If you want to separate the various objects in the same system on to different layers, but keep a relation to the system, use the override field. 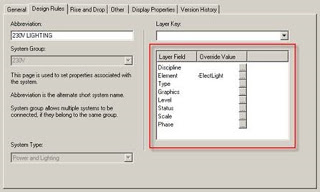 The objects will then be placed on a generated layer, if the Layer Key drop down is left blank, the object layer key, will identify the layer, but any layer field in that layer can be overridden with values from this dialog.

You can control the color, line width and other layer properties, but make sure that there is a layer key to all the layers needed, that way the template file doesn’t need to be filled with layers.

AutoCAD MEP will when it generates layers using the override functionality go look for the generated layer in the layer key list, and if it finds it will create the layer using the properties from the layer key list.
dialog.
Get more tips and tricks here.
For more information on the software solutions, training and consulting Ideate provides, please visit the Ideate, Inc. homepage.

Bill has over 25 years experience in applying MEP & AEC design solutions for large commercial companies, this has led to actively developed Autodesk® Revit® implementation strategies, techniques, and procedures for architectural and MEP companies. He has worked for TEECOM Design Group, GTE/GTEL, Greg LeDoux and Associates, and Scottish Power in England. Bill is an Autodesk MEP Implementation Certified Expert, and has been the Lead Designer for several multi-million dollar communication sites which have included structural, electrical, HVAC, conduit, cable plans and equipment layouts. He graduated from the Pasadena Institute of Technology and has a Sustainable Design Certification from the University of California at Berkeley.